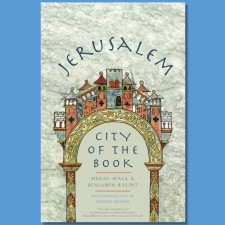 Jerusalem is an extraordinary city where some of the western world’s most enduring ideas were developed. A distinguished panel will tell the story of the ancient city, and of its people of diverse faiths and cultures, through forays into its most inaccessible holdings: hidden Jewish archives, rare manuscripts in Christian and Islamic libraries, and the riches of its Armenian heritage. The program will also illustrate the ways in which libraries and archives continue to play a vital role in preserving history and culture, and will highlight contemporary efforts to digitize and preserve endangered documents.

Preserving the Memories of Others:
Hidden Jewish Libraries

Benjamin Balint, a writer and translator living in Jerusalem, is the author of several acclaimed works of non-fiction, including Jerusalem: City of the Book, coauthored with Merav Mack. He is also the author of Kafka’s Last Trial: The Case of a Literary Legacy, which won the Sami Rohr Prize for Jewish Literature in 2020 and has been translated into ten languages. Balint’s reviews and cultural journalism have been published widely, including in the Wall Street Journal, Haaretz, and the Weekly Standard, and his translations from Hebrew have appeared in the New Yorker, Poetry International, and Crazyhorse.

Father Columba Stewart, a Benedictine monk, is executive director of the Hill Museum & Manuscript Library (HMML), vice president for programs in religion and culture, and professor of theology at Saint John’s University in Collegeville, Minnesota. Columba has traveled throughout the Middle East, Africa, Eastern Europe, the Caucasus, and South Asia, cultivating relationships with communities that possess historic manuscript collections from the early medieval to modern periods. Under his leadership, HMML has digitized more than 150,000 manuscripts in many of the world’s most dangerous and inaccessible places, including northern Iraq, Syria, and Timbuktu in Mali, covering a range of religious and cultural traditions. These texts and records are available online through the virtual HMML platform (vHMML.org).

Bedross Der Matossian, an associate professor of history, is vice-chair of the Department of History and associate director of the Harris Center for Judaic Studies at the University of Nebraska–Lincoln. He is also president of the Society for Armenian Studies. His award-winning books include Shattered Dreams of Revolution: From Liberty to Violence in the Late Ottoman Empire and the forthcoming book, The Massacres of Adana and Aleppo: Revolution and Violence in the Late Ottoman Empire.