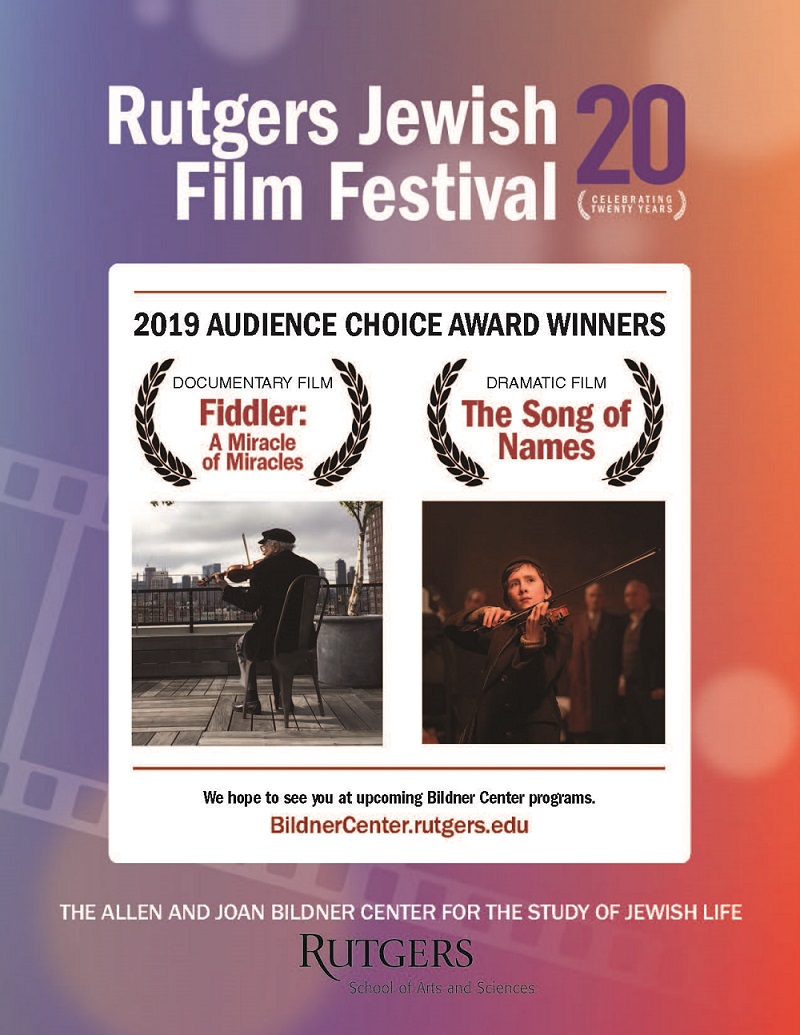 With unprecedented access, this film captures the conflict and drama surrounding Kiryas Joel, a village occupying a square mile within the town of Monroe in upstate New York that has become one of the fastest-growing Hasidic communities in the United States. When the secular residents of the larger township learn of Kiryas Joel’s desire to annex adjacent land to address its population growth, it sets off a turf and legal battle. The documentary presents people on all sides of a conflict—religious enthusiasts, dissidents, people who doubt their own faith, and residents of Monroe who want to protect their bucolic lifestyle—and raises complex issues about the boundaries of religious freedom in the United States.

From Cairo to the Cloud: The World of the Cairo Geniza

This lively documentary tells the astonishing story of the discovery of a vast treasure trove of documents hidden for centuries in the “geniza,” or sacred storeroom, of an ancient synagogue in Fostat, Old Cairo. From sacred manuscripts to business accounts to personal letters in a variety of Jewish and non-Jewish languages, the Cairo Geniza contained the largest cache of Jewish historical documents ever found, revolutionizing our understanding of Jewish history and illuminating a thousand years of vibrant Jewish life in the heart of the Islamic world.

Fiddler: A Miracle of Miracles

The new documentary, Fiddler: A Miracle of Miracles, looks at the cultural history of one of the world’s most beloved musicals. When Fiddler on the Roof opened on Broadway in 1964, it explored themes of tradition, religion, and anti-Semitism against a modern backdrop of radical social change. With rare archival footage and interviews with musical luminaries including Stephen Sondheim, Topol, and Lin-Manuel Miranda, the film explores the impact of this long-running, award-winning musical, including the true wonder of wonders—that audiences worldwide and for the last half century all claim the story as their own.

This beautifully animated short film, based on Sholem Aleichem’s short story “The Fiddle,” tells the tale of a boy and his beloved fiddle. Narrated by the renowned Yiddish theater and Broadway actor Mike Burstyn.

Tovah Feldshuh recreates 100 years of Jewish history, playing 45 different characters (including David Ben-Gurion, Moshe Dayan, and, of course, Golda Meir herself) in this new film. Her Tony Award-nominated play, Golda’s Balcony, was the longest-running one-woman show in Broadway history. Rare, multi-camera footage from the play’s original run was recently unearthed and assembled into this riveting film.

WINNER: 10 Audience Awards at all of its Competitive Film Festivals to Date

With a poignant mix of hilarity and seriousness, Latter Day Jew follows H. Alan Scott, a gay writer-comedian, cancer survivor, and former Mormon who becomes a Jew by choice. His family embraces his new spiritual path as he visits Israel and prepares for his Bar Mitzvah.

An intimate and moving film, Leona tells the story of Ariela, an independent-minded artist who lives with her family in a traditional Jewish neighborhood in Mexico City. Pressured to find a suitable match by her well-meaning but overprotective family, she instead falls for Ivan, a non-Jewish writer. Ariela finds herself torn between her family and forbidden love as she struggles to make difficult choices regarding her career and love life.

An affectionate look at the young actor Anton Yelchin, who played an endearing young Chekov in the new Star Trek movies. His Russian-Jewish parents were renowned ice skaters who came to the United States in order to give him a better life. A young artist with a prolific career in film and television, Yelchin died in a tragic accident at the age of twenty-seven. Narrated by Nick Nolte and including interviews with colleagues, family, and friends, including Chris Pine, Jennifer Lawrence, and J. J. Abrams, the documentary paints a broad portrait of an intensely authentic and gifted artist.

“The film is incredible and I think it’ll show you all different sides of the guy that I knew—this curious, fascinating, complex, strange little dude.”
—Chris Pine, Actor

Based on the true story of “Latvia’s Schindlers,” this award-winning feature film offers a gripping account of Žanis Lipke, honored as one of the “Righteous Among the Nations” for his heroic deeds in Latvia during World War II. Despite the hardship that members of the Lipke family endured under successive Soviet and German occupations, they embarked on a covert operation to save local Jews, moving them from the Riga ghetto to an underground bunker hidden on their property. The Lipkes are credited with saving about 40 of the 200 Jews in Latvia who survived the war.

Going behind-the-scenes at the Israel Museum in Jerusalem, this award-winning film takes viewers on an immersive exploration of one of Israel’s most important cultural institutions. Filmed during the museum’s fiftieth-anniversary celebrations, the documentary follows the daily routine of a colorful cast of characters—the museum director, a singing security guard, a Palestinian guide, and a host of other museum staff and visitors—with surprising humor, human stories, precious art, and the unfolding of the history of Israel.

“It captures the extraordinary vitality and variety of the Israel Museum.”
—Hannah Brown, Jerusalem Post

When Anna and Adam, a young Parisian Jewish couple, embark on their long-awaited honeymoon, Poland seems an unlikely choice. But this seemingly lighthearted comedy soon takes on a darker tone. As they explore the country, searching in vain for evidence of past family connections, they confront modern-day anti-Semitism and their own families’ silence about the past.

Two rebellious young women—one fleeing the chaos of secular hedonism for the disciplined comforts of faith, the other desperate to transcend her religious upbringing for sexual and spiritual freedom—cross paths unexpectedly in Jerusalem with startling consequences. This poignant drama from renowned Israeli filmmaker Avi Nesher plumbs the divide between Israel’s secular and religious Jews.

The Song of Names

Academy Award nominees Tim Roth and Clive Owen star in this sweeping historical drama about a man’s search for his childhood best friend—a Polish violin prodigy orphaned in the Holocaust—who vanished decades before on the night of his debut performance. The latest work from acclaimed director François Girard (The Red Violin), The Song of Names is based on Norman Lebrecht’s novel of the same name.

The Spy Behind Home Plate

This feature-length documentary about the enigmatic baseball player Moe Berg focuses on a little-known Jewish hero. From the streets of Newark to five major league teams during baseball’s golden age, to his secret life spying for the Office of Strategic Services during World War II, Berg’s improbable story is told with rare historical footage and revealing interviews with family and an all-star roster from the worlds of history, sports, and spy craft.

Acclaimed documentary filmmaker Aviva Kempner has been making films since 1972. With incredible depth and sophistication, her films focus on non-stereotypical figures of Jewish history and celebrate their untold stories. Three of Aviva’s films have screened previously in the RUJFF: The Life and Times of Hank Greenberg (2000), Yoo-Hoo, Mrs. Goldberg (2009), and Rosenwald (2015).

When a leading contender for the Nobel Prize in Economics is found dead in his bed, his four closest friends scramble to keep it a secret in the increasingly hectic days leading up to the big announcement. Stockholm is a fast-paced Israeli TV series about the resilience of friendship in the twilight years, told with no shortage of wit and heart. Its stellar cast, including Dov Glickman (Shtisel) and Sasson Gabai (The Band’s Visit, The Other Story), strikes the perfect balance of humor and drama with irreverence and chutzpah.

This critically acclaimed film explores the Israeli-Palestinian conflict in a satirical comedy. When Salam, a hapless young Palestinian man with no experience in the television business, begins work on a soap opera filmed in Ramallah, his daily commute takes him through an Israeli checkpoint. IDF officer Assi soon discovers Salam’s connection to the show—and his own wife’s obsession with it—so he uses his power to become Salam’s secret writing partner. With both men now invested in the soap’s narrative arc, Salam has to concoct plot twists to suit viewers on both sides.

When the daughter of Yakov Cohen, a printer in Jerusalem, is expelled from school because of her Sephardic background, he decides to fight back. He is just a regular guy with no connections. But he has the will and the passion to take action, and a belief that he and other Sephardic Jews deserve to be proud of their heritage. Based on real events from 1983, The Unorthodox tells a remarkable underdog story, leading to the creation of the Shas political party in Israel. Rich in comedy and drama, the film also has a terrific soundtrack.

Opening Night on November 3 is sponsored by the Blanche and Irving Laurie Foundation.

Set in 1949 Budapest, Aldo and Klara have both lost everyone they loved to the ravages of World War II. A survivor of the camps, forty-two-year-old Aldo lives a solitary life as a doctor, while teenage Klara lives reluctantly with her great-aunt, holding on to hope that her parents will return. When Klara meets Aldo, she finds the father figure missing from her life and hope begins to return for both of them. But their father-daughter relationship is misunderstood by Communist officials and complicated by Klara’s burgeoning sexuality. A lyrical story of the healing power of love told through the eyes of a young woman in post–World War II Hungary.

Eleven-year-old David Wiseman is mad about cricket, but hopeless at the game. When a Jamaican family moves in next door and builds a cricket net in the backyard, David is in seventh heaven. But when anti-Semitic neighbors shift their prejudice onto new arrivals, David’s family is caught in the middle, and he has to choose between fitting in and standing up for his new friends. Oscar-nominated director Paul Morrison delivers a charming and moving coming-of-age drama offering a view into a working-class Jewish community in 1960s London.