A Conversation with Ronit Matalon

author of Bliss and The Sound of our Steps
Cosponsored by Rutgers Institute for Women and Art
Trayes Hall, Douglass Student Center
In conjunction with The Fertile Crescent Gender, Art, & Society project 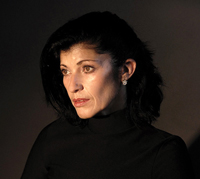 Ronit Matalon was born in 1959 to a family of Egyptian-Jewish descent. She studied literature and philosophy at Tel Aviv University. Matalon has worked as a journalist for Israel TV and for the daily Haaretz, covering Gaza and the West Bank during the First Intifada. She has also worked as a critic and book reviewer for Haaretz. At present, she is senior lecturer in Hebrew and comparative literature at Haifa University. She teaches creative writing there as well as at the Sam Spiegel Film School in Jerusalem and is a member of the Forum for Mediterranean Culture at the Van Leer Institute. Two of Matalon's novels were bestsellers in Israel; her children's book A Story that Begins with a Snake's Funeral has been made into a movie. Matalon has been awarded the prestigious Bernstein Prize (2009) for The Sounds of Our Steps.

The Fertile Crescent: Gender, Art, and Societyhas been made possible through support from the National Endowment for the Arts grant number 10-4100-7033; the Andy Warhol Foundation for the Visual Arts; the Violet Jabara Charitable Trust; the Artis Foundation and the Office of Cultural Affairs, Consulate General of Israel in New York, both of which helped fund the participation of the five Israeli artists in the exhibition, Ofri Cnaani, Ayana Friedman, Efrat Kedem, Sigalit Landau, and Ariane Littman; Consulate General of the Federal Republic of Germany which funded the participation of Parastou Forouhar and Ebru Özseçen; and the Harris Finch Foundation. Several programs including the inaugural symposium were made possible by a grant from the New Jersey Council for the Humanities, a state partner of the National Endowment for the Humanities. Any views, findings, conclusions or recommendations in this program do not necessarily represent those of the National Endowment for the Humanities or the New Jersey Council for the Humanities. Program partners and co-sponsoring departments including the Rutgers Centers for Global Advancement and International Affairs also contributed to the funding as did Basem and Muna Hishmeh, along with other individuals. The Rutgers University Institute for Women and Art is a unit of the Rutgers Office of the Associate Vice President for Academic and Public Partnerships in the Arts and Humanities and a member institute of the Rutgers Institute for Women's Leadership Consortium. The IWA receives General Program Support from the New Jersey State Council on the Arts/Department of State, a Partner Agency of the National Endowment for the Arts.