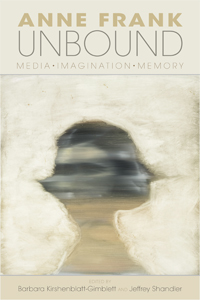 One of the world’s most widely read books, Anne Frank’s Diary of a Young Girl, has engendered responses of singular range and scope: dozens of musical compositions, thousands of Youtube videos, a museum visited by millions, as well as numerous works of fine art, biography, fiction, poetry, dance, film, broadcasting, pedagogy, even humor. These many engagements with Anne Frank’s life and work are a phenomenon worthy of scrutiny in their own right.  Taken together, they demonstrate how the encounter with this widely read work inspires individuals around the world to express their own attachment to the diary and its author in practices of remembrance, imagination, and contestation.

Jeffrey Shandler is Professor in the Department of Jewish Studies at Rutgers, where he has been on the faculty since 2001.  A scholar of modern Jewish culture, he specializes in Yiddish culture, Holocaust remembrance, and the ethnography of contemporary Jewish life, especially in America. His work also focuses on Jewish visual culture and the roles that broadcasting, photography, film, and other media play in modern Jewish life.  His publications include Jews, God, and Videotape: Religion and Media in America (2009),  Adventures in Yiddishland: Postvernacular Language and Culture (2005), While America Watches: Televising the Holocaust (1999).  Awakening Lives:  Autobiographies of Jewish Youth in Poland before the Holocaust (2002), Entertaining America: Jews, Movies, and Broadcasting (2003), and, most recently, Anne Frank Unbound:  Media, Imagination, Memory (2012). He currently serves as President of the Association for Jewish Studies and was recently elected a fellow of the American Academy for Jewish Research.

Please RSVP to This email address is being protected from spambots. You need JavaScript enabled to view it. or 732-932-2033.