Inventing Odessa: Jewish Culture on the Edge of the Russian Empire 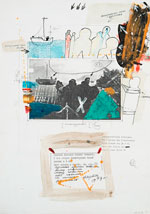 "Seven fires of hell burn around Odessa"  So decreed the stern collective conscience of nineteenth-century Russian Jews.  The historical verdict on this most unruly and dangerous place poised on the edge of the Black Sea has rehabilitated Odessa: we know it better now as a Jewish mother-city, the incubator, of Jewish nationalism.  But how could secular Russian-speaking Jewish Odessa, more famous for its residents' regular attendance at the opera than at the synagogue, have produced a Hebrew renaissance and a political movement dedicated not to the love of pleasure but to the love of Zion?  In this lecture, Litvak explores the powerful connection between the city air of Odessa and the Jewish revival which it inspired.  Through the eyes of some of its most famous Jewish residents -- both its admirers and its detractors -- we will see how the temptations of Odessa changed the course of Russian-Jewish life.

Olga Litvak is a leading scholar of Jewish Eastern Europe.  Educated at Columbia University, Litvak currently holds the Leffell Chair in Modern Jewish History at Clark University, where she teaches courses in Russian and Jewish history.  Litvak's recent books include Conscription and the Search for Modern Russian Jewry, Indiana University Press, 2006, and Haskalah: The Romantic Movement in Judaism,  published by Rutgers University Press in 2012.  She is currently working on a study of Russian Zionism.