Desert in the Promised Land: Nature, Settlement, and the Politics of Space 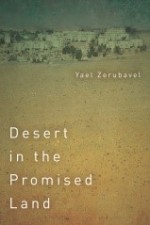 Yael Zerubavel will discuss her new book, Desert in the Promised Land, which explores the multiple meanings of the desert as both a geographic region in Israel and a symbolic landscape in Zionist and Israeli culture. Drawing on a wide range of literary, artistic, and folkloric sources, Zerubavel will illustrate the changing views of the desert from the early twentieth century to the present, shedding light on romantic and mythical associations, settlement and security issues, and environmental concerns.

Yael Zerubavel, a professor emeritus of Jewish studies and history, is the founding director of the Allen and Joan Bildner Center for the Study of Jewish Life and the founding chair of the Department of Jewish Studies at Rutgers University. She has published extensively in the areas of collective memory, Israeli culture, war and trauma, and symbolic landscapes. Her books include the award-winning Recovered Roots: Collective Memory and the Making of Israeli National Tradition (University of Chicago Press, 1995), and Desert in the Promised Land (Stanford University Press, 2018). She is currently working on the book, Biblical Reenactments and the Performance of Antiquity in Israeli Culture.

“Written with passion, innovation, and clarity, Desert in the Promised Land makes an original and significant contribution towards understanding the deeper currents of the Israeli-Palestinian conflict. By analyzing the role of the desert in Zionist ideology and the collective identity of Israel, Zerubavel adds new dimensions to her groundbreaking and acclaimed study of Israeli myths and memory, Recovered Roots.” —Tom Segev, author of 1949: The First Israelis