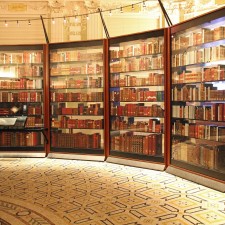 Join Rutgers alumni and friends for a fascinating talk on ancient Jewish manuscripts.

Gary A. Rendsburg, the Blanche and Irving Laurie Chair of Jewish History, Rutgers University, will discuss Hebrew manuscripts held by the major libraries of the world: Oxford, Cambridge, the Vatican, and more, including our very own Alexander Library. The pièce-de-résistance will be the 1,000-year-old Torah scroll sheet obtained by the Library of Congress in 2017, purchased after consultation with Prof. Rendsburg.

Gary A. Rendsburg serves as the Blanche and Irving Laurie Chair of Jewish History in the departments of Jewish Studies and History at Rutgers University, where he holds the rank of Distinguished Professor. His teaching and research focus on “all things ancient Israel” – primarily language and literature, though also history and archaeology. His secondary interests include post-biblical Judaism, the Hebrew manuscript tradition, and Jewish life in the Middle Ages. Rendsburg is the author of seven books and about 180 articles. His most recent book is How the Bible Is Written (2019), with particular attention to the use of language to create literature.

In addition, he has produced two lecture series for the Great Courses program, one on "The Book of Genesis" and one on "The Dead Sea Scrolls." During his distinguished career, Rendsburg has served as visiting researcher at Oxford, Cambridge, Sydney, Penn, UCLA, and the Hebrew University.