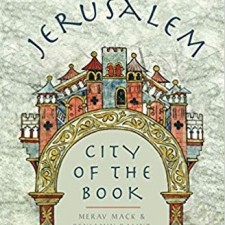 As per Rutgers University, this program was cancelled as of March 11, 2020 in response to the coronavirus (COVID-19).

Jerusalem is an extraordinary city where some of the western world’s most enduring ideas were developed. What might it look like to see Jerusalem, with its encounters between people of diverse faiths and cultures, as a city of the book? A distinguished panel will tell the story of the ancient city’s magnificence and strife through forays into the city’s most inaccessible holdings, including its significant Jewish archives, rare manuscripts in Christian and Islamic libraries, and the riches of its Armenian heritage. The program will illustrate how libraries and archives continue to play a vital role in preserving history and culture, and will highlight contemporary efforts to digitize and preserve endangered documents.

Preserving the Memories of Others: Hidden Jewish Libraries

Benjamin Balint is a writer and translator living in Jerusalem. He is the author of Kafka's Last Trial (Norton) and co-author with Merav Mack of Jerusalem: City of the Book (Yale). He has taught literature in the Bard College humanities program at Al-Quds University in Jerusalem. His essays appear in the Wall Street Journal, Haaretz, and Die Zeit, and his translations from the Hebrew have appeared in The New Yorker and The Atlantic.

The career of Columba Stewart, OSB, D.Phil., links the ancient past with current events in some of the world’s most volatile regions. His international travels are a stark contrast to the steady routine of Benedictine monastic life in central Minnesota. As both monk and scholar, Father Columba works with the full range of HMML’s partners, from traditional religious communities to academic institutions and major foundations. The Hill Museum & Manuscript Library (HMML), located at Saint John’s University, holds the world’s largest archive of manuscript photographs in both microfilm and digital format. HMML identifies manuscript collections around the world that need photographic preservation. HMML’s archives now contain more than 200,000 complete manuscripts, ranging in size from large codices of hundreds of folios to brief documents consisting of just a few leaves.

Bedross Der Matossian is an Associate Professor of Modern Middle East History in the Department of History at the University of Nebraska-Lincoln. Currently he is the vice-chair of the Department of History and the Associate Director of the Harris Center for Judaic Studies at the University of Nebraska. He is also the President of the Society for Armenian Studies. His areas of interest include ethnic politics in the Middle East, inter-ethnic violence in the Ottoman Empire, Palestinian history, and the history of Armenian Genocide. He serves on the Board of Directors of multiple international educational institutions and on the editorial board of multiple journals, the most prominent of which is the flagship journal of the field: International Journal of Middle East Studies (IJMES). For more info see https://un-lincoln.academia.edu/BedrossDerMatossian.