Holocaust Memory in the Digital Age 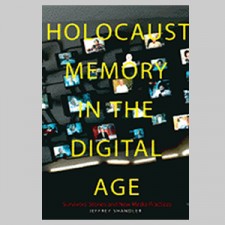 Professor Shandler will explore exceptional moments captured in video interviews with Holocaust survivors recorded by the Shoah Visual History Foundation. Drawing on an in-depth study of these interviews, the talk will address remarkable examples, such as when survivors display wartime injuries or religious articles that they had during the war. These moments both disrupt the recordings’ format and austere visual aesthetic and reveal the power attributed to visual evidence and the importance of watching survivors relate their wartime experiences.

Jeffrey Shandler, Professor of Jewish Studies at Rutgers University, studies Jewish cultural encounters with modernity, examining a wide range of practices among diaspora Jews, primarily in North America and Eastern Europe from the late nineteenth century to the present. His work examines Jewish memory practices, especially the remembrance of the Holocaust and prewar Jewish life in Eastern Europe; Jewish cultural history, especially 20th-century media practices; Yiddish language, literature and culture; and the intellectual history of Jewish Studies, among other topics.