Out of the Shtetl: Anarchists, Zionists, and Other Dreamers Encounter the World 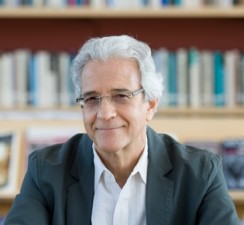 Professor Bartov will discuss the fate of some extraordinary individuals who hailed from the small Galician town of Buczacz in the century between the Spring of Nations of 1848 and the outbreak of World War II. This was a time in which new educational, professional, and political opportunities opened up for the inhabitants of poor provincial towns in the borderlands of Eastern Europe. But it was also a time of rising nationalism that eventually identified people as members of ethnic, national, and ideological communities.

Some significant individuals who had roots in Buczacz include:

These individuals represented the hopes, dreams, and disillusionments of the first generation of Jews who left the proverbial shtetl and went out into the world. This talk is based on many years of research, which have now culminated in Bartov’s book Anatomy of a Genocide: The Life and Death of a Town Called Buczacz.

Born in Israel and educated at Tel Aviv University and St. Antony's College, Oxford, Omer Bartov's early research concerned the Nazi indoctrination of the Wehrmacht and the crimes it committed in World War II, analyzed in his books, The Eastern Front, 1941-1945, and Hitler's Army. He then turned to the links between total war and genocide, discussed in his books Murder in Our Midst, Mirrors of Destruction, and Germany's War and the Holocaust. Bartov's interest in representation also led to his study, The "Jew" in Cinema, which examines the recycling of antisemitic stereotypes in film. His last monograph, Erased, investigates interethnic relations in the borderlands of Eastern Europe. As a framework for this research, he led a multi-year collaborative project at the Watson Institute, culminating in the co-edited volume, Shatterzone of Empires. Bartov's new book, Anatomy of a Genocide: The Life and Death of a Town Called Buczacz, will be published by Simon and Schuster in January 2018.

Professor Bartov's book Anatomy of a Genocide: The Life and Death of a Town Called Buczacz will be on sale at the event.