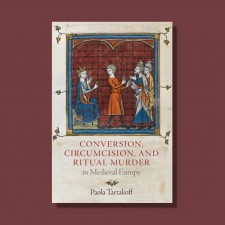 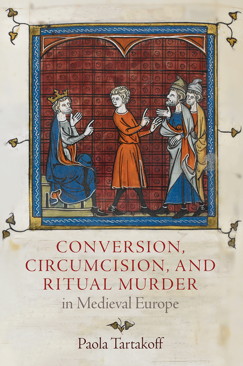 In England in 1234, Jews were accused of having abducted, circumcised, and converted a five-year-old Christian boy to Judaism. As a result of this charge, Jews were executed, and Jewish homes were looted and torched. Professor Paola Tartakoff will speak on her new book, Conversion, Circumcision and Ritual Murder in Medieval Europe, which explores the “Norwich Circumcision Case” and sheds new light on medieval anti-Judaism, religious conversion, and the predicaments of children whose identities Jews and Christians contested. Examining the links between conversion, circumcision, and ritual murder accusations, Professor Tartakoff proposes a solution to the mysterious events of 1234.

Paola Tartakoff, the Chair of the Jewish studies department and a professor of history and Jewish studies at Rutgers University, is the author of Conversion, Circumcision, and Ritual Murder in Medieval Europe (University of Pennsylvania Press, 2020). She is also the author of Between Christian and Jew: Conversion and Inquisition in the Crown of Aragon, 1250–1391 (University of Pennsylvania Press, 2012).

David Shyovitz is associate professor of history and Jewish studies at Northwestern University and the director of NU's Crown Family Center for Jewish and Israel Studies. His research focuses on pre-modern Jewish cultural and intellectual history, with an emphasis on the history of halakhah, the development of Jewish theology, and the dynamics of Jewish-Christian and Jewish-Muslim relations. He is the author of A Remembrance of His Wonders: Nature and the Supernatural in Medieval Ashkenaz, and of the forthcoming "O Beastly Jew!" Jews, Animals, and Jewish Animals in the Middle Ages.