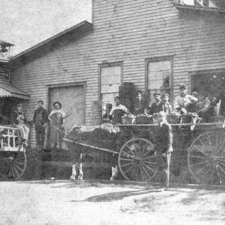 
Organized farming has been a key part of the Jewish experience in the modern world, though this history is largely unknown or forgotten. In fact, Jewish agricultural settlements have spanned the globe from the mid-nineteenth century until today, and exciting new initiatives in Jewish farming continue to sprout up around the country.

Bildner Visiting Scholar Jonathan Dekel-Chen will introduce a new online exhibit that he developed at Rutgers about the history of Jewish farming--not only in New Jersey, but also the Americas, Europe, and Israel. The exhibition takes a deep dive into the amazing story of Jewish agriculture in New Jersey, where three generations of Jews planted roots in a new country, made New Jersey bloom, and pursued the American dream. It also tells the important and striking story of large-scale Jewish farming on four continents.

Professor Dekel-Chen continues as the Bildner Visiting Scholar at Rutgers in 2021-22.