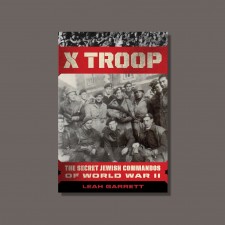 funded by Leon and Toby Cooperman


In June 1942, Winston Churchill and his chief of staff devised an unusual plan: the creation of a new, top-secret commando unit made up of Jewish refugees who had escaped to the United Kingdom. Called “X Troop,” the unit was made up of a motley group of Jewish intellectuals, artists, and athletes from Germany and Austria who would stop at nothing to defeat the Nazis. This extraordinary unit is the subject of Dr. Leah Garrett’s talk, based on her new book, X Troop: The Secret Jewish Commandos of World War II. Drawing on extensive original research, including interviews with the last surviving members, Garrett follows this unique band of brothers from Germany to England and back again, with stops at British internment camps, the beaches of Normandy, and the hellscape of Terezin concentration camp—the scene of one of the most dramatic, untold rescues of the war.

The first forty people in attendance at the event will receive a free copy of Garrett’s book!

THIS EVENT WAS IN PERSON.  NO RECORDING AVAILABLE.

She has published four books in Jewish literary history including her most recent, Young Lions: How Jewish Authors Reinvented the American War Novel, which won the 2017 Jordan Schnitzer Book Award for modern Jewish history and was a finalist for the National Jewish Book Award. Her new book, X-Troop: The Secret Jewish Commandos of World War Two, is forthcoming with Houghton Mifflin Harcourt and Chatto (Penguin).

Dr. Garrett has also been the recipient of multiple fellowships including a Fulbright Fellowship to Tel Aviv University and a ACLS Junior Faculty Mellon.