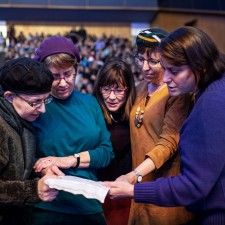 Session I - Between American and Israeli Orthodoxy

Watch Recording of Session I

Adam S. Ferziger , the Allen and Joan Bildner Visiting Scholar in 2022, is a professor in the Department of Jewish History and Contemporary Jewry, and holds the Rabbi S.R. Hirsch Chair for Research on the Torah and Derekh Erez Movement at Bar-Ilan University in Israel. He is a senior associate at the Oxford Centre for Hebrew and Jewish Studies, University of Oxford and co-convener of the annual Oxford Summer Institute on Modern and Contemporary Judaism. His research focuses on the history of religious responses to modern and contemporary life in Western Europe, North American, and Israel as reflected, among others, in denominational and ideological divides, Jewish law, leadership and gender. A past of recipient of Bar-Ilan's "Outstanding Lecturer" prize, Ferziger has been as a visiting professor/fellow at University of Oxford, UK (2013), University of Sydney, New South Wales, Australia (2012), and University of Shandong, Jinan, China (2005). In 2017, he was Arnold Distinguished Visiting Chair in Jewish Studies, College of Charleston, South Carolina, and in 2018 he was a visiting scholar at the Kaplan Centre for Jewish Studies and Research, University of Cape Town, South Africa. He is the author or editor of seven books, including Exclusion and Hierarchy (University of Pennsylvania Press, 2005), Jewish Denominations (Melton Institute – The Hebrew University of Jerusalem, 2012), and his monograph, Beyond Sectarianism (Wayne State University Press, 2015), was the winner of the National Jewish Book Award in American Jewish Studies.