A Jewish Journalist's View of the World 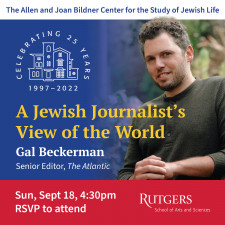 Please join us for
The Bildner Center’s 25th-Anniversary
Kickoff Event
featuring a talk by
Gal Beckerman, award-winning author and senior editor, The Atlantic
with opening remarks by
Jonathan Holloway, President and University Professor

What does it mean to have a Jewish perspective on the news? How does the distinctiveness of the Jewish experience inform how we view what happens in the United States and in the world? Gal Beckerman's career at both legendary Jewish institutions like the Forward and influential secular ones like the New York Times has given him a unique perspective on what it means to pursue objectivity while understanding one's own specific identity commitments, enriching both. Beckerman will share stories and insights from his years as an editor and writer, covering international news as well as art and culture. 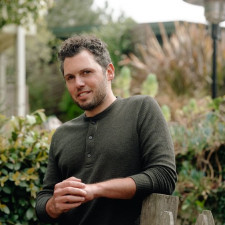 Gal Beckerman, award-winning author and journalist, is the senior editor for books at the Atlantic. Formerly an editor at the New York Times Book Review, Beckerman has written for many publications, including the New Republic and the Wall Street Journal. He is the author of the new book The Quiet Before: On the Unexpected Origin of Radical Ideas (2022), a New York Times Book Review Editors’ Choice. Named a best book of the year by the New Yorker and the Washington Post, his first book, When They Come for Us, We’ll Be Gone: The Epic Struggle to Save Soviet Jewry (2010), won a National Jewish Book Award and the Sami Rohr Prize for Jewish Literature.

When They Come for Us, We’ll Be Gone: The Epic Struggle to Save Soviet Jewry

The Quiet Before: On the Unexpected Origins of Radical Ideas

New York Times Editors’ Choice: An “elegantly argued and exuberantly narrated” look at the building of social movements—from the 1600s to the present—and how current technology is undermining them. --The New York Times Book Review