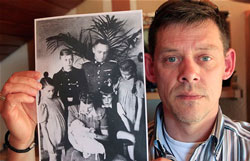 This film chronicles descendants of the most powerful figures in the Nazi regime, whose inherited family legacies left them permanently associated with one of the greatest crimes in history. What is it like for them to have grown up with a name that immediately raises images of murder and genocide? These personal and candid interviews reveal how those who did not choose to become "Hitler's children" attempt to cope with this legacy.

A limited number of tickets may be available at showtime for sold-out films. Starting one hour before the screening, names will be taken at the theater for a stand by list. If seats are available, tickets will be sold at the time of the film.