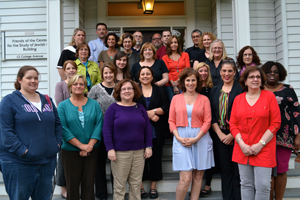 Overview of the Master Teacher Institute in Holocaust Education: 2011-2012

The Master Teacher Institute in Holocaust Education (MTI) continues to draw a large and diverse group of middle and high school teachers from across New Jersey, furthering its mission to develop a base of expert teachers in Holocaust studies who then serve as resource providers in their schools, districts, and communities. There is no fee to participate, and educators earn professional development credits.

The program offers advanced training by scholars and other professionals who are leaders in the field of Holocaust studies. Each session features a scholarly presentation followed by a pedagogical workshop using primary documents related to the theme of the session.

One of the major strengths of the MTI is the ability to utilize Rutgers resources. Jeffrey Shandler, a professor of Jewish studies, serves as the faculty adviser; Karen Small, Bildner Center associate director, coordinates the project; and Rutgers faculty members in Jewish studies, history, and sociology contribute as guest speakers.

The MTI’s fall 2011 course, “Before the Holocaust: Historical Background,” offered an overview of the complex precipitating factors that led to the Holocaust. Twenty-nine middle and high school teachers from New Jersey public schools participated in this course. Colleen Tambuscio, educational consultant for the fall semester, presented the pedagogical component at each session.

Paola Tartakoff, a professor of Jewish studies and history at Rutgers, kicked off the term with a lecture on Jewish-Christian relations through the ages. She examined the diverse religious and cultural dynamics at play in the relationship between Jews and Europe’s majority Christian population. Nancy Sinkoff, chair of Rutgers’ Department of Jewish Studies, presented a talk on Jewish life in pre–World War II Europe. Paul Hanebrink, a Rutgers professor of history, dealt with the swift political rise of Nazism and Nazi Germany in the prewar years.

Professors Sally Charnow (Hofstra University) and Eric D. Weitz (University of Minnesota) rounded out the curriculum with sessions on European political history and the rise of modern nationalism during the nineteenth century, as well as the ideological origins of fascism, which took root in early twentieth-century Spain, Italy, and Germany.

Christina Chavarría, coordinator of the Regional Education Corps Program at the U.S. Holocaust Memorial Museum (USHMM), opened the term with a presentation on the challenges of teaching the Holocaust to children and young adults.

Dr. Patricia Heberer, a historian at the USHMM’s Center for Advanced Holocaust Studies, spoke about the experiences of Aryan children during the Nazi era. A session on Holocaust literature for young adult readers was copresented by Shandler and Perri Geller-Clark, MTI educational consultant for the spring semester.

Hidden children in Belgium was the subject of a session led by Suzanne Vromen, a professor emeritus of sociology from Bard College. Vromen’s talk was based on her recent book, Hidden Children of the Holocaust: Belgian Nuns and Their Daring Rescue of Young Jews from the Nazis.

Alan Sadovnik, a Board of Governors Distinguished Service Professor in sociology and education at Rutgers–Newark, spoke about his mother’s experience in the Kindertransport and the remarkable discovery of a diary she had kept as a child. He discussed the difficulties involved in coming to terms with his parents’ legacy and how it shaped his life.

In June, a one-week intensive course, “Introduction to Holocaust History,” was added to the MTI offerings to provide greater flexibility for teachers to study this topic.