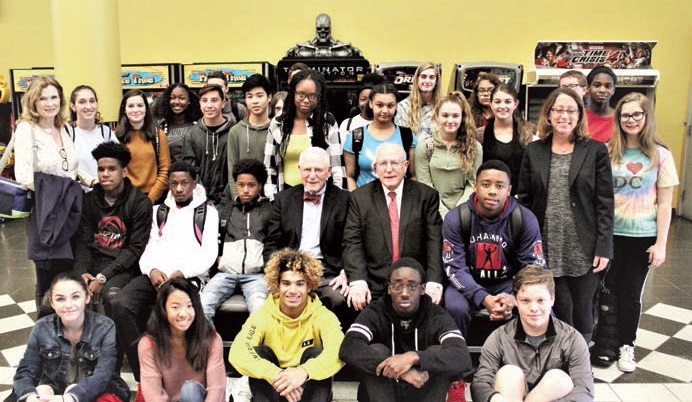 Approximately 300 middle and high school students from across New Jersey attended a free screening of A Bag of Marbles as part of the outreach of the Rutgers Jewish Film Festival. The film is a heartwarming adaptation of Joseph Joffo’s memoir, which recounts how he and his brother escaped through Nazi-occupied France to the southern free zone during World War II. Their tale of bravery and strength as two Jewish boys struggling to survive on their own resonated with the student audience.

Henry and Bernard Schanzer, twin brothers now living in New Jersey who were hidden together as young boys on a farm in France, spoke with the students after the screening,which was held at the AMC Loews New Brunswick. They reflected on the ways their own wartime experiences mirrored those of the brothers portrayed in the film.Separated from their parents, Henry and Bernie’s sibling bond was key to their survival, as it was for Joffo and his brother in the film.

One particular takeaway for the students was the fact that survival during the Holocaust often depended upon a twist of fate, a coincidence, or the kindness of strangers. The Schanzers’ presence in the theater gave proof to what often seemed like unbelievable circumstances. After the screening, the students and teachers also expressed how meaningful it was to hear the brothers’ story in tandem with the one they had just seen on the screen, and they quickly lined up to take photos with the Schanzers.