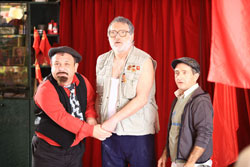 Grisha's dream of opening his own restaurant can come true thanks to an unexpected inheritance from his uncle in Kiev. The catch: he must name it "Red October" and feature a bust of Lenin, not easy to find in modern-day Ashdod, Israel. Sculptor-comrade Vladnel imagines the restaurant's ushering in a proletarian utopia, and the staff threatens a strike. Food, family, and ideology clash in this offbeat comedy.