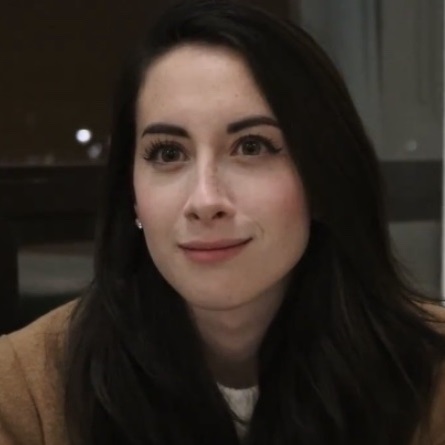 Dina Fradkin’s experience as a first-generation American born to Russian Jewish immigrants shaped her decision to major in psychology and minor in history at Rutgers. She noticed that the stigma associated with mental health issues kept members of her community from seeking professional support when they needed it. But Dina knew clinical services were broadly available and effective, and wanted to study their best practices.

A two-time recipient of the Deborah S. and Herbert B. Wasserman Research Award, Dina used the award funding to conduct research in Israel. She graduated this May and is currently taking several courses to complete a second degree, in biology, at Rutgers, while studying for the MCAT and getting clinical experience before applying to medical school.

My family came from St. Petersburg, Russia to Brooklyn before bouncing around different communities in New Jersey. They remain entrenched in Russian culture here, hardly assimilating—especially my grandparents, who raised me. But they had the most profound impact on me in so many meaningful ways, teaching me that education is freedom and showing me the importance of the sciences, which influenced my decision to pursue a career in medicine.

What inspired you to take your first Jewish studies course?

When I enrolled in Professor Paola Tartakoff’s course at Rutgers on Jewish history from antiquity to the Middle Ages, it was my first formal foray into Jewish religion and culture. I loved the course. It motivated me to expand the scope of my research into the realm of Jewish studies. I have since focused on the children of Russian-Jewish immigrants and their perceptions about mental health, a path that has helped me understand a great deal about my family as well. Also, it was Professor Tartakoff who introduced me to Professor Michal Raucher, who later served as my independent study advisor.

Talk a little about your research project.

When speaking with other first-generation Americans of Soviet-Jewish descent, I discovered that nearly all of us have a family member with a psychological illness or disability, or know someone in the community suffering from one. But no one talked about it. The incidence rate seemed far lower among our non-Jewish Russian peers, which made me curious about our unique genetics. Only within the last two decades have studies shown that Ashkenazi Jews have an elevated risk for certain diseases, such as schizophrenia and bipolar disorder. Yet it has long been considered taboo within the Russian community to seek psychiatric services, both culturally and because of the record of abuse within the psychiatric services system in the former Soviet Union.

My research project, “Beliefs about Psychological Services (BAPS) of First-Generation, American-Born Russian Jews,” explores whether that cultural stigma lingers in my generation, influencing our decision to seek or not to seek psychological care when we need that kind of support. With the help of Professor Raucher, I conducted a BAPS survey, disseminating it through Rutgers’ social media outlets and beyond. The Wasserman Award made it possible for me to travel to Israel, where I expanded my research to include Israeli-born children of Russian émigrés, enabling me to compare these two geographic groups as well.

I always wanted to be a physician, and I’m looking forward to a career in obstetrics and gynecology. I hope to incorporate what I’m learning from my research into my medical practice by putting special focus on patient sensitivities and cultural differences, while ensuring treatment adherence. These aspects of care often get lost in the shuffle, given the overwhelming pressures and technical demands on medical practitioners today. I see this as a meaningful opportunity to bring a human touch back into the way we care for patients in the modern age.