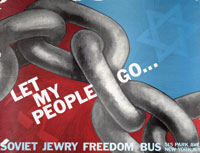 The movement to free Soviet Jews in the 1970s and 1980s galvanized the American Jewish community. An interfaith coalition was formed through the efforts of  Sisters Ann Gillen and Margaret Traxler, longtime activists on behalf of Soviet Jewry, and the American Jewish Committee. Fred A. Lazin, the Lynn and Lloyd Hurst Family Professor of Local Government at Ben-Gurion University of the Negev, will discuss interfaith cooperation as a model for social justice within the broader context of the Soviet Jewry Movement and Jewish-Christian relations in the United States.

Fred A. Lazin is the Seymour & Lillian Abenshohn Visiting Professor of Israel Studies at American University this year. In 2005, he received the Israel Political Science Association's award for outstanding English language book on politics for his book The Struggle for Soviet Jewry in American Politics: Israel versus the American Jewish Establishment. Lazin is currently researching the role of the American Jewish Committee in the struggle for Soviet Jewry, including its lobbying efforts in Washington and its ties with Israel.

Please RSVP to This email address is being protected from spambots. You need JavaScript enabled to view it. or (732) 932-2033.