Jewish Renaissance in the Russian Revolution 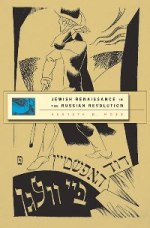 Kenneth B. Moss discussed his new book, Jewish Renaissance in the Russian Revolution, which was awarded the 2010 Sami Rohr Prize for best work of Jewish nonfiction by the National Jewish Book Council. He examined an unlikely Jewish cultural renaissance and a radically new vision of Jewish culture that emerged between 1917 and 1921 in the midst of war and revolutionary upheaval in the Russian empire.

Kenneth B. Moss is the Felix Posen Chair of Modern Jewish History at Johns Hopkins University and director of the university’s Leonard and Helen R. Stulman Program in Jewish Studies. He is currently at work on a new book, The Unchosen People: Jewish Life and Thought in the Age of the Nation.