Ulysses S. Grant and the Jews 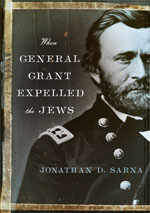 In 1862, Civil War general Ulysses S. Grant issued a sweeping order expelling “Jews as a class” from his war zone. It remains the most notorious anti-Jewish official order in American history, and it came back to haunt Grant in 1868 when he ran for president. The memory of the “obnoxious order” shaped President Grant’s relationship with the Jewish community, and, surprisingly, he did more for Jews than any other president had done before. Sarna will explore this fascinating period in American Jewish history, the subject of his forthcoming book When Grant Expelled the Jews.

Dr. Sarna has written, edited, or co-edited more than twenty books, including the new Jews and the Civil War: A Reader and A Time to Every Purpose: Letters to a Young Jew.  He is best known for the acclaimed American Judaism: A History.  Winner of the Jewish Book Council's "Jewish Book of the Year Award" in 2004, it has been praised as being "the single best description of American Judaism during its 350 years on American soil."