Jewish Art and the Struggle of Tradition in Modernity 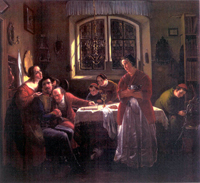 As Jewish visual interpreters contemplated the changing nature of Jewish life, they related to traditional life, the Jewish historical past, the Bible, and the challenges of modernity with daring and unpredictable fashion. The visual images offer a unique and alternative entry into the changing contours of modern Jewish existence.

Richard I. Cohen is the Paulette and Claude Kelman Chair in French Jewry Studies and the head of the Department of Jewish History and Contemporary Jewry at The Hebrew University of Jerusalem. His books include The Burden of Conscience: French-Jewish Leadership during the Holocaust (1987), and Jewish Icons: Art and Society in Modern Europe (1998), which received the Arnold Wischnitzer Prize for best book in Jewish history. This year he is a visiting fellow at the Katz Center for Advanced Judaic Studies at University of Pennsylvania where he is studying the treatment of Jewish figures in visual representations, and the distinctive penetration of visual images into Jewish life in the seventeenth and eighteenth centuries.

The Ruth Ellen Steinman and Edward J. Bloustein Memorial Lecture was established to honor the memory of these two extraordinary individuals. For nearly 19 years, the Blousteins dedicated their enormous energies to Rutgers University. The fund was created in 1988 after Ruth Ellen died following a long and heroic battle with illness. Sadly, there was cause to broaden the purpose of the fund when Edward Bloustein, Rutgers’ beloved president, died suddenly a year later in December 1989. The endowment supports a lecture series that is intended to celebrate the values and interests Ruth Ellen and Ed cherished and cultivated throughout their lives, namely the preservation of animal species and the natural environment; the celebration of love, happiness, and laughter as tools of clinical medicine; and the exploration and promotion of humane values which they believed were woven in the fabric of Jewish tradition.