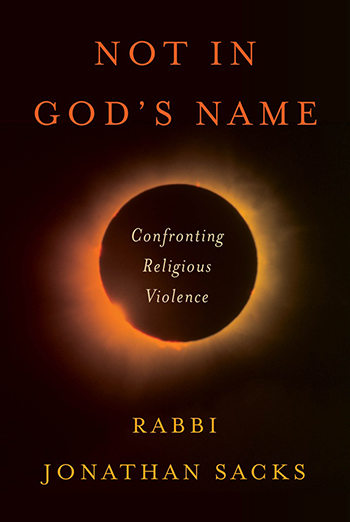 Books on sale at the event

Tickets on sale through the Bildner Center website only; no phone orders.
General public: $15; Rutgers students: Free with ID (limit one per student).

Rabbi Sacks will discuss his timely and powerful new book, Not in God’s Name: Confronting Religious Violence which explores the relationship between violence and religion with a focus on the historic tensions between the three Abrahamic faiths: Judaism, Christianity, and Islam.

Rabbi Lord Jonathan Sacks is a global religious leader, philosopher, author of more than 25 books, and moral voice for our time.  He is currently the Ingeborg and Ira Rennert Global Distinguished Professor of Judaic Thought at New York University and the Kressel and Ephrat Family University Professor of Jewish Thought at Yeshiva University.  Rabbi Sacks served as Chief Rabbi of the United Hebrew Congregations of the Commonwealth between 1991 and 2013.

Described by H.R.H. The Prince of Wales as “a light unto this nation” and by former British Prime Minister Tony Blair as “an intellectual giant”, Rabbi Sacks is a frequent contributor to radio, television and the press both in Britain and around the world. A visiting professor at several universities in Britain, the United States and Israel, Rabbi Sacks holds 16 honorary degrees, including a Doctor of Divinity conferred to mark his first ten years in office as Chief Rabbi, by the then Archbishop of Canterbury, Lord Carey.