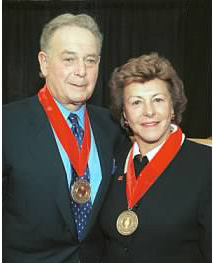 Allen was the former Chair and CEO of Kings Super Markets, a family-owned company for 52 years until its 1988 sale to Marks and Spencer. He was also a past chair of the Food Marketing Institute (FMI), the supermarket industry's national and global trade association, and a founder and past chair of the New Jersey Food Council. In 2002, Allen was named by Supermarket News as one of the 50 visionary food industry leaders of the last 50 years.

Allen is survived by his loving children, sons Rob and Jim, daughters-in-law Elisa and Nancy, and grandchildren Elana, Lizzie, Ari, Eli and Rafi. He is also survived by his sister, Phyllis Schechter, and is predeceased by a grandson, Peter. He will be greatly missed by his family, friends and the communities in New Jersey and Florida where he lived, worked, and served.

In lieu of flowers, the family suggests that donations may be made in his memory to the Allen and Joan Bildner Center for the Study of Jewish Life, Rutgers University, 12 College Avenue, New Brunswick, NJ 08901; the United States Holocaust Memorial Museum, 100 Raoul Wallenberg Place, SW, Washington, DC 20024; and the Maltz Theater, 1001 E. Indiantown Rd., Jupiter, FL 33477.