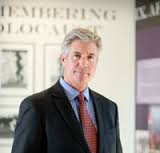 In this slide lecture, Dr. Young will trace what he calls an "arc of memorial vernacular" from World War I and the Holocaust to the Vietnam Veterans Memorial, the Memorial to the Murdered Jews of Europe in Berlin, the National 9/11 Memorial at Ground Zero, and the memorial process in Norway.

James E. Young is Professor of English and Judaic Studies at the University of Massachusetts Amherst. Professor Young has published widely and is the author of At Memory's Edge: After-images of the Holocaust in Contemporary Art and Architecture (Yale University Press, 2000), The Texture of Memory (Yale University Press, 1993), which won the National Jewish Book Award in 1994, and Writing and Rewriting the Holocaust (Indiana University Press, 1988). He was also the Guest Curator of an exhibition at the Jewish Museum in New York City, entitled "The Art of Memory: Holocaust Memorials in History" in 1994, with venues in Berlin and Munich, and was the editor of The Art of Memory (Prestel Verlag, 1994), the exhibition catalogue for this show.

Professor Young served as consultant for Germany's national "Memorial to Europe's Murdered Jews," dedicated in 2005 and he consulted with Argentina's government on its memorial to the desaparacidos, as well as with numerous city agencies on their memorials and museums. In 2003, he was appointed by the Lower Manhattan Development Corporation to the jury for the World Trade Center Site Memorial competition.