The Apostle Paul and the Rabbis 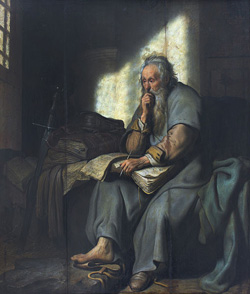 Paul, the most influential follower of Jesus, played a pivotal role in the establishment of Christianity as a world religion. The rabbis, in contrast, worked to reinterpret Jewish practice after the destruction of the Second Temple in 70 CE. Dr. Rosen-Zvi will present a novel approach to the relationship between Paul and the rabbis, suggesting that some early rabbinic debates were shaped by—and responses to—Paul’s views.

Professor Ishay Rosen-Zvi is the head of the Talmud program in the Department of Hebrew Culture Studies at Tel-Aviv University, where he teaches Talmudic literature and culture. His main interests are: Midrashic hermeneutics; the formation of the Mishna; Temple rituals in rabbinic literature; and gender and sexuality in late antiquity.  His book  titled "The Rite that Was Not: Temple, Midrash and Gender in Tractate Sotah" (Hebrew) was published by Magness Press (2008) and an English version is forthcoming in the Journal for the Study of Judaism-Supplement Series, Leiden: Brill.  A monograph on the history of the "evil inclination" from the Bible to rabbinic literature and early Christianity is forthcoming from University of Pennsylvania Press under the title: "Demonic Desires: YETZER HARA and the Making of Rabbinic Anthropology".