It is now the Herbert and Leonard Littman Families Holocaust Resource Center (HRC) at the Allen and Joan Bildner Center for the Study of Jewish Life at Rutgers.

The HRC was rededicated in February 2000 in honor of two families who have been prominent supporters of philanthropic organizations and community activities throughout Central New Jersey. Rutgers President, Francis L. Lawrence, and Center Director, Yael Zerubavel, were among the speakers at this special celebration.

Last year, Herbert (RU ’52) and Leonard Littman provided a $350,000 endowment to name the Holocaust Center. “It was one of the value choices we wanted to make,” said Leonard Littman who, with his brother Herbert, returned from military service in the 1950s to build Littman Jewelers into the largest family owned jewelry chain in the United States and the seventh largest jeweler.

Leonard and Barbara Littman of Highland Park and Herbert and Linda Littman, formerly of Watchung and now Boca Raton, Fla., have a long history of public service.

“We felt we were in a position to make a large contribution and put money back into the community that has been so supportive of us our entire lives. It is important that people never forget the Holocaust,” he said.

The Holocaust Resource Center was established in 1997 to teach future generations about the Holocaust by training educators and providing educational materials to teachers, students and scholars. The Center’s activities enhance public awareness of the Holocaust and promote discussion of racism, genocide, discrimination and the importance of protecting human rights. 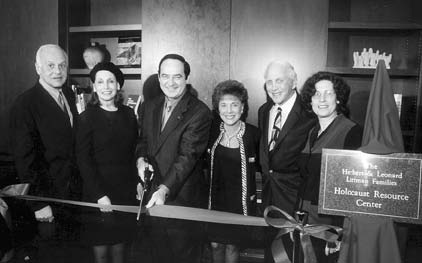