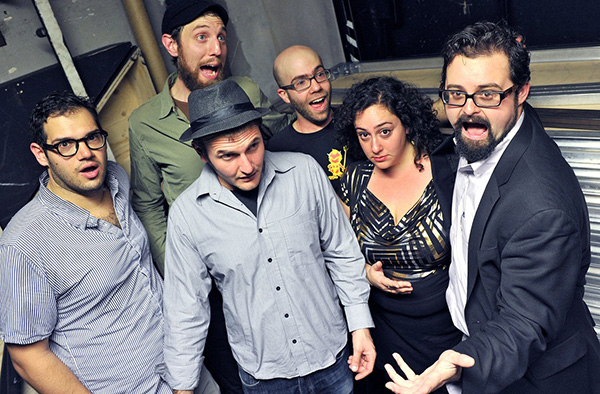 Yiddish Princess, a Yiddish rock band from hipster Brooklyn, mixes power pop and hard rock with traditional Yiddish music, reflecting the powerful mix of cultures found in Brooklyn and other hipster outposts around the world today. The concert, which is open to the public, will be followed by a talk-back with members of the band moderated by Dr. Jeffrey Shandler, a professor of Jewish Studies at Rutgers and scholar of contemporary Yiddish culture, including groups that break the mold like Yiddish Princess.

The concert is presented in conjunction with Shandler’s undergraduate course at Rutgers on the Culture of Yiddish, which surveys Yiddish language and culture from the Middle Ages in Europe to contemporary Brooklyn. “The idea of a hard rock Yiddish band may seem surprising to some people, who think of Yiddish as being tied to the past,” Shandler notes, “but many young musicians are busy creating 21st-century Yiddish culture.  For me, Yiddish Princess exemplifies contemporary Yiddish hipster culture, which draws on the riches of Yiddish going back generations and energizes it with the most up-to-date sounds and sensibilities. Anyone who wants to understand what is happening with Yiddish today should not miss this chance to hear contemporary Yiddish rock.”

Yiddish Princess was cofounded by Sarah Mina Gordon and Michael Winograd. Gordon, the band’s lead singer, has recorded and performed with the top Yiddish groups in the world, including The Klezmatics and Frank London’s Klezmer Brass All-Stars. Winograd, the group’s keyboardist, is a leading Klezmer clarinetist. The band released a self-titled EP in 2010. More information about Yiddish Princess can be found on their website at www.yiddishprincess.com. The concert is cosponsored by the Department of Jewish Studies and the Bildner Center.

Save the date: August 5 Di Golden Kale produced by The National Yiddish Theater
Presented with Mason Gross School of the Arts